Patrick Doyle looks much older than his 66 years.

He has been existing in conditions his support worker described as like something from the Dark Ages. It was only when police took Patrick home after he had been mugged, while collecting his pension in Nottingham, that they discovered his plight.

They found a home – a hovel more akin to the time of Dickens than the 21st Century – with no gas, no electricity, and with candlesticks on the window sill. There was a bucket for a toilet, and only a fireplace for cooking and heating water. There were broken windows upstairs in what was a totally unsecured property.

Mr Doyle said: “I used to sit in the greenhouse because it was warmer than the house. I’d collect wood down by the River Lean and put it on a fire to keep warm and cook food. “I was left the property by my mother several years ago but now I can see I couldn’t keep on top of things. It’s been really bad this winter.” In a recent survey, conducted for Age UK of more than 1,300 people aged 60 or over, the results were startling.

Nearly a third were likely to resort to extreme measures to keep warm, including wearing a coat and scarf inside.

Fourteen percent lived in one room. With nearly 14 million over-60s in the UK, that is around 1.5m choosing to live in one room to contain heat. Four percent said they would stay in bed all day to try to keep warm, while 9% percent said they could not get warm at home last winter. Age UK is concerned that many more older people are stuck in fuel poverty – well over three million of them spending more than a tenth of their income on their energy bills. 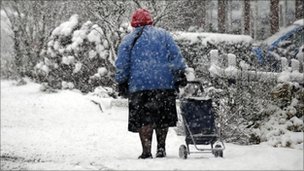 These people could also be missing out on cold weather payments of £25 a week when it is particularly cold. In parts of the UK like Scotland, where CWPs are likely to be triggered three or four times a year, some pensioners could be missing out on up to £100 worth of payments over the winter.

Patrick has now received advice on what he is entitled to. Despite the previous dilapidated state of the house, with little furniture, he held on to his two prize pianos and still plays them today. But now he sits to play in the comfort of a centrally-heated house, with electricity and double-glazed windows.

Luckily for Mr Doyle the police referred him to Age UK and, together with support service Sixty Plus, they have turned his life around.

John Matthew, a senior case worker for Age UK in Nottingham, said: “Patrick’s house stood out in the street, the window frames were rotten, the windows broken, the house was in a state of total disrepair until the police came across him.”

Acting as the home improvement agency, Age UK was able to oversee a total refurbishment. Central heating was installed, gas and electricity reconnected, and a kitchen and bathroom provided. It was funded by releasing equity from the house which Patrick had lived in since his mother died. But that is not always possible. “Some homes are in such a state they’re valued at just one pound.

“Private home owners used to be able to obtain grants but since April they have to get a loan and older people are less keen to borrow money,” said Mr Matthew. But Mr Doyle’s case is not unique.

Age UK in Nottingham received a call from a builder to say he had been working on a roof and noticed the one next door had fallen in. It transpired the 80-year-old lady living there had been living downstairs in one room for several years, ever since her husband died. “We’re seeing more cases like Patrick. I know one elderly lady who had no bed, no proper heating or kitchen and went to sleep in a chair in front of a paraffin heater which burned her legs. “She’s not been allowed home from respite care until her accommodation can be improved. These cases are no longer isolated ones,” said Mr Matthew.

Sharon Ewen, Mr Doyle’s support worker for the past few months from Sixty Plus Metropolitan Support Trust, said: “Patrick was living a life like something from the Dark Ages. “But we’re starting to see many more extreme, complex cases. The cold weather just makes things worse.”

The advice from Age UK is claim your benefits, eat well and keep warm, stay active, get a flu jab and shop around for the best energy rate and get energy efficient.